Equality and Fairness for All Americans Coalition Launches 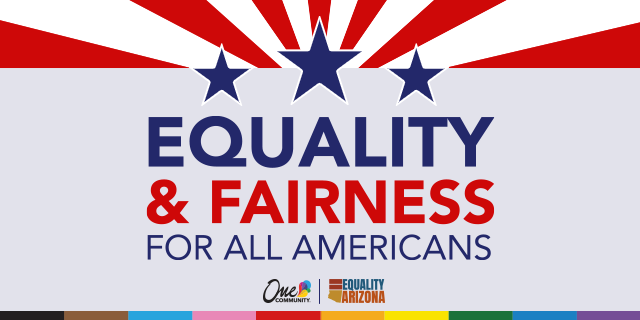 (Phoenix, Ariz. December 1st, 2021) – Today, the Equality and Fairness for All Americans Coalition launched to advance federal civil rights protections for LGBTQ Americans in employment, housing, credit, education, jury service and public accommodations.  The Coalition, led by ONE Community and Equality Arizona, aims to end the partisan gridlock that has stalled equality efforts in Congress. The Coalition’s goal is to gain bipartisan support for federal legislation that can unite all Americans around our nation’s core values of freedom, fairness, and opportunity to make lasting and impactful change.  The nationwide coalition is composed of bipartisan and diverse stakeholders from the LGBTQ, faith and business communities including Local First Arizona, Glendale Chamber of Commerce, Arizona Coyotes, Arizona Diamondbacks, Phoenix Rising, The Bob & Renee Parsons Foundation, Upward Projects, the Bishops of the Desert Southwest Conference of the United Methodist Church & the Episcopal Diocese of Arizona, and the Jewish Community Relations Council of Greater Phoenix.

Support for LGBTQ non-discrimination protections has continued to grow in recent years across religious and political affiliations. Over 94% of Fortune 500 companies have non-discrimination policies that include gender identity and/or sexual orientation. Additionally, a 2020 poll from the nonpartisan Public Religion Research Institute found that seventy-six percent of Americans favor laws that would prohibit discrimination based on sexual orientation and gender identity in employment, housing and public accommodations.

“We believe there is a path forward for equality and fairness for all Americans. We have a once in a generation opportunity to pass landmark legislation within the next year to bring federal protections and opportunity to millions of Americans,” said Angela Hughey, President of ONE Community and Coalition co-founder.

Last year’s historic Supreme Court decision in Bostock v. Clayton County Georgia brought federal civil rights protections to LGBTQ Americans in employment for businesses over fifteen employees. However, LGBTQ Americans do not have federal civil rights protections in housing or public accommodations, meaning it is not illegal to deny someone service or housing based on their sexual orientation or gender identity. Currently fewer than half the states in the country and less than 2% of cities and counties have non-discrimination laws that include civil rights protections based on sexual orientation and gender identity, leaving millions of Americans vulnerable to harassment and discrimination.

The genesis of the Equality and Fairness for All Coalition comes from the historic efforts in Arizona to successfully pass an LGBTQ-inclusive non-discrimination ordinance in Mesa, Arizona in employment, housing and public accommodations. The Mesa ordinance had broad support from diverse and bipartisan stakeholders such as Republican Mayor John Giles, Senator Kyrsten Sinema, the business community, and the faith community, including The Church of Jesus Christ of Latter-day Saints.“With the success of our efforts in Mesa, Arizona we feel we have a template that can be successful on a national level, bringing immediate relief to millions of Americans who live in fear of discrimination and have no legal recourse. We believe non-discrimination laws should and can protect both religious and LGBTQ rights. Many people of faith are also LGBTQ and many LGBTQ people are people of faith,” said Michael Soto, Executive Director of Equality Arizona and Coalition co-founder.

“We are all God’s children, and we need to treat others, as we want to be treated ourselves. Religion is meant to include not exclude, and we all deserve to be treated with dignity and respect, without exception. We believe there is a path forward that can provide fair protections for all Americans regardless of who you are, who you love or what you believe,” said Rev. Marian Edmonds-Allen, Executive Director of Parity.

“Equality and fairness are not red or blue issues – they’re American values. All hard-working people, including those who are LGBTQ, want to do their jobs and provide for their families. LGBTQ people want the same thing as everyone else -- the freedom to work hard, access basic services, and take care of themselves and their loved ones without fear of discrimination. It’s time to advance federal protections that guarantee these rights,” said Tyler Deaton, Senior Advisor of American Unity Fund.

The Equality and Fairness for All Coalition supports:

Learn more about the Equality and Fairness for All Coalition and join the effort at: EqualityandFairness.com